Hay fever, despite its name it is neither caused by hay nor causes fever.

Hay fever (allergic rhinitis) is a major chronic respiratory condition that is often underdiagnosed and undertreated.

It affects approximately 1 in 5 Australians and costs the economy more than 7 billion pa.

It can affect sleep, cause daytime fatigue, decrease alertness, reduce the ability to concentrate and increase depression and irritability.

The link between hay fever and asthma is well-established (united airway disease). Up to 75% of patients with asthma are also affected by hay fever (allergic and non-allergic rhinitis). When untreated hay fever can worsen asthma control and failure to treat hay fever results in increased asthma medication use for comorbid patients. Every individual who has asthma and hay fever should be actively managing the upper respiratory symptoms by using an intranasal corticosteroid spray, no matter what severity.

Any airborne particle(s) can trigger hay fever, it depends on whether the person is sensitive to it or not. If the person is sensitised, once these particles are inhaled and enter in contact with the lining of the nose and sinuses (nasal mucosa) a reaction is triggered in the nose and/or eyes resulting in symptoms similar to those of a cold/flu. Hence it is important to be able to differentiate whether it is a cold/flu or if it is a flare up of hay fever/asthma as the way to manage each condition is quite different. Have a look at the figure below and next time you have a “cold/flu” ask yourself: “Is it a cold (virus) or is it a reaction to something I am breathing in?”. Usually a cold/flu resolves within 10-14 days so if your symptoms are lingering for longer contact us and we might be able to help you find a solution! :o)

(Article based on article “Ditch the AR myths!” published AJP 2022) Does the coooler air make your Asthma worse?

If changes in the temperature trigger your asthma symptoms, then maintaining a consistent temperature throughout your home can be helpful. Cold, dry air is a particularly common problem for people whose asthma is not well controlled. read on for some tips on cooling and heating which may help to prevent or reduce Asthma symptom flare ups. 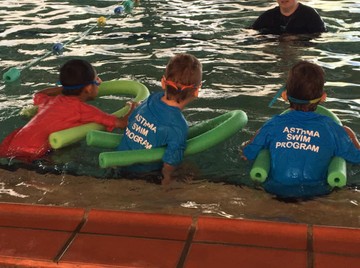 Swim Starts back for Term 3!

First day back at swim this morning after the school holidays it was great to see everyone out even though it was still a bit cold in the pool!

AFNT acknowledges the Traditional Owners of the lands on which we meet and conduct our services, respecting language and culture and elders past and present.